Without knowing it at the time, some of the soppresata that we made was smaller than it should have been.  Apparently it is not customary to use pig casings; most soupy makers use cow casings which make a much larger link.  I wonder just how many good things began by accident like this, because due to the smaller links and shorter curing time, we now have soupy ready in January instead of April as we originally expected.  Today it looked ready and we were able to “sample”, which in this case means about two pounds worth, or eight links.  We sampled it alone, with assorted cheeses, with fresh homemade warm bread with butter and a little wine.  Oh man.  We “sampled” before dinner and, for some reason, nobody was hungry at dinner.  Leftovers for tomorrow. 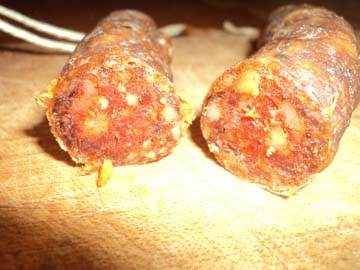 This entry was posted in Farm Life, Food, Pastured Pork. Bookmark the permalink.